From 2013, an old blog following another insomniac night. This Saturday's Leap in the Dark (23rd May) is dedicated to translation, so ahead of that here's my two penn'orth:

An insomniac night, so here's a Verlaine translation made (appropriately) during a rainstorm. Am reading his collection Sagesse at the moment, verses he wrote following his release from Mons prison where he served 18 months for shooting and wounding his lover Rimbaud. 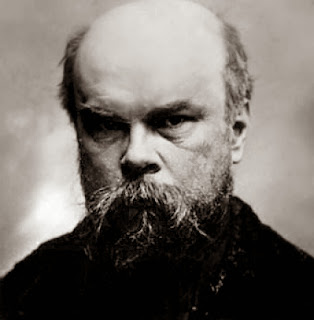 He came to England in March 1875 and found employment teaching French, Latin and drawing at a village school in a Lincolnshire backwater called Stickney. He moved after a year to another school in cosmopolitan Bournemouth, returning to Paris in 1877, there to be lionised to death. I'm currently researching Verlaine's two years in England because while his hectic three months' residence with Rimbaud in Camden Town is well-known, the later period in Stickney and Bournemouth is not, although it saw him write some of his best poetry. Here's a sample, with my translation:

It rains in my heart
As it rains on the town,
What is this languor
That so soaks my heart?

Oh sweet sound of rain
On earth and on roof.
For my dumb heart again,
This song of the rain.

Rain for no reason
In a heart lacking heart.
What? Without treason?
This grief without reason.

By far the worst pain,
That I cannot explain
Without love, without hate,
That my heart is all pain.
Posted by David J Collard at 08:57