A birthday gift from my fine son: something I've wanted to own for many years but never got around to buying. It's The Waste Land: A Facsimile and Transcript of the Original Drafts Including the Annotations of Ezra Pound, scrupulously edited by Valerie Eliot, the poet's widow.It's a beautiful large format Faber edition and here's the cover: 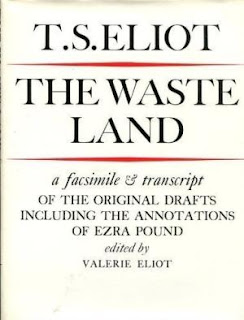 "Too penty" was Ezra Pound's brisk annotation - too pentametric, in other words, too rhythmical. Earlier he  scribbled "Too tum-pum at a stretch" next to a similarly conventional line.

The thrill of the facsimile is to see two fine minds fizzing and popping and to see a record, in the many ink and pencil annotations to typescript and manuscript (some of it in Eliot's beautifully fluid and fluent 'best' handwriting). Pound is never wrong, not once - he cuts and shapes with a confident assurance and the result is the poem we know today.  It's surprising how much dud material was excised - the length culled to the  434 lines we know today. He has a zero-tolerance policy when it comes to equivocation, slashing every 'perhaps' (and adding variations on the phrase 'Damn perhaps', possibly a reference to the Blake aphorism 'Damn braces, bless relaxes'.)

Reading a TLS review today of the The Poems of T. S. Eliot: The Annotated Text edited by Christopher Ricks and Jum McCue, I was struck by the fact that the well-known opening lines from 'Gerontion' ('Here I am, an old man in a dry month, / Being read to by a boy, waiting for rain')  are a direct paraphrase (or lift, if you like) from A. C. Benson's biography of Edward Fitzgerald, published in 1905:

Here he sits, in a dry month, old and blind, being read to by a country boy, longing for rain.

As the TLS reviewer points out

By changing this to the first person, Eliot stakes an imperial claim: any place in the continent of literature where he raises his flag as good as belongs to him. And his claim was effective - when people quote these lines, they are quoting Eliot, not Benson.

But do people quote these lines? I said in a review of a volume 3 of Eliot's letters that I had once met a bright young graduate with a recent degree in Eng. Lit. who had never even heard of T. S. Eliot. Not, you understand, that she had never read The Waste Land, or Four Quartets. She had never heard of the poems or the author. She was politely interested - is he any good? British? No? What did he write?

She wasn't rdoubled by her ignorance and neither was I, because, well - you can't read everything and he wasn't on the syllabus. And she loved Virginia Woolf. I can't think of a better example of what's happened to the teaching of English Literature since the 1980s and, before you deride what you're quick to assume is my blustering old fartishness let me add that I'm all for it. Eliot's a costive, querulous and nasty piece of work. But he isn't negligible and you need to know all about Eliot before you write him off. To know about Virginia Woolf but not Tom Eliot is just plain wrong, although I was intrigued by the idea of a university offering degrees in English literature that omitted a man who is still widely (and correctly) regarded as the leading modernist poet of the previous century, as well as a leading critic and cultural arbiter. Because if Eliot isn't central to our understanding of cultural history, who is? But even asking that question shows how old hat I am. I mean - T. S. Eliot?

The young woman had what evolutionists call an adaptive advantage. She didn't need Eliot where she was going (and, come to that, neither do I. Neither do you). She was extremely bright and engaging and professionally ambitious, working as a trainee producer at the BBC. She didn't need Old Possum holding her back with his intellectual precision, his Tory monarchism and bloodless High Anglicanism. We none of us do, but ditching Eliot's values needn't involve abandoning his standards. That Eimear McBride's A Girl is a Half-formed Thing was rejected by publishers for a decade because they either couldn't see its value or, having seen it, didn't know how to proceed, is a terrible reflection on the state of our literary culture. If I, a  middle-aged hack critic, could immediately see that this book was the real thing, is it possible to assert (and I do so with absolute modesty) that a humanities education completed before the arrival of Critical Theory and all that entailed, enabled me to do so?

What was disastrous about literary criticism in the 1980s is that none of it had even the slightest appeal to the non-academic, non-specialist reader. None of it reached beyond the hermetic world of university departments and conferences and academic publishing, or beyond the particular sub-canon in which it narrowly flourished. It was couched in the kind of language that can drive you nuts.

That so much academic writing about literature should be so aggressively unliterary (the prose equivalent of a musicologist being tone deaf) is enough to put you off reading, or at least reading academic writing. That a reader such as myself feels repelled and dismayed by academic writing about literature (and, come to that, about architecture, and theatre, and history, and photography - especially photography) is not something that troubles me much any longer. If academic writing has any content worth sharing it will appear, mediated into reasonably plain English on the internet, sooner or later. But - and this is a very bad thing - literary criticism no longer forms part of mainstream public discourse as it did (albeit within a small circle) back in the modernist heyday of the 1920s.