‘The title is grossly inaccurate,' the author assures us. 'The book is, rather, a portrait of a disappeared provincial England, a time and place unpeeled with gruesome relish.’ This is Jonathan Meades, introducing his 2014 book An Encyclopedia of Myself.

Gruesome relish has been a Meades trademark since Filthy English (2003), a spectacularly nasty collection of short stories featuring no end of squalid transgressions - incest, addiction, zoophilia, murder, the lot, all lovingly depicted. For earlier evidence of his guignol tendency we have to go all the way back to 1979, and his little-known debut publication. This is Their Life - An Insight into the Unseen Lives of Your Favourite T.V. Personalities "including details of their hobbies, habits, and home lives". Sharing the bright red and orange cover are Max Boyce, Leonard Rossiter, Benny Hill, Noel Gordon, Yootha Joyce and the comedy impersonator Mike Yarwood, who provides the foreword. Not simply a hack's cut-and-paste job, the volume's witty and sardonic potted biographies ('For years Nerys Hughes was 28 . . .') anticipate to a quite terrifying degree the inanity of contemporary celebrity culture. This might might not feature on his CV but is of interest - a cut above the usual  showbiz hack froth. You can pick up a copy for less than three quid on www.abe.com and it's an essential purchase for Meades completists. 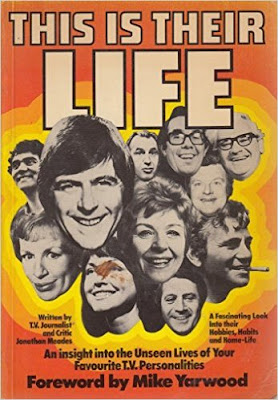 If a sequel were commissioned today would Meades's mugshot be on the jacket, alongside (say) Jeremy Clarkson, Sandi Toksvig, Piers Morgan and the stars of Eastenders? Unlikely, because while he is an established broadcaster, and a distinguished one, he's never been and is never likely to be a family favourite, never a crowd-pleaser. Surrounded by anodyne telly peers who are personalities, he has a personality. He's too bright, too trenchant, too much his own man, but the telly Meades in Ray-bans, baggy black suit and moth-eaten pompadour, chronically loquacious, biliously erudite, is an artful construct that we should be wary of mistaking for the real thing,

An Encyclopedia of Myself is ostensibly a memoir of growing up in Salisbury in the 1950s and the form - essays alphabetically arranged and chronologically deranged - suits Meades's strengths as a writer: short (or shortish) riffs with an autobiographical theme, many of them candid and moving. The first entry can stand for the rest. Under the heading ABUSER, SEXUAL, the author confesses to (and appears to regret) the absence of any personal history of childhood abuse.

'Paedophilia' is, he says, a misnomer since it means nothing more than the love of children, but he doesn't  offer 'paedomania' as the proper term for the sexual abuse of minors. It may be too late in the day for such lexical pedantry, and in any case he has other big words up his sleeve. Within the first ten pages of this, the first entry, we get gingivitic, naugahyde, mnemonic (twice), endogamy and albinism (the congenital disorder also known as achromia, achromasia, or achromatosis, terms which one imagines Meades only decided to omit after much soul-searching). Admirers of Meades' prose will be as happy as pigs in clover, and readers of this blog will have no need of a dictionary to look up such words, but others may feel there's a stink of the lamp. Vocabulary aside, his argument is that, lacking any experience of childhood abuse he has no commercially-exploitable trauma to proffer his readers, and that, further, genuine victims of such abuse are (a) complicit in their victimhood and (b) at a commercial advantage in the marketplace for miserabilist memoirs. Fair enough.

What works best are those moments when he ditches the thesaurus and speaks clearly and plainly: 'There were children before there was childhood' is the promising opener to an airless and unfocussed monologue on the corruption of the innocent under industrial capitalism. The paragraph collapses under its own lexical weight when the author deploys, in quick succession, the words 'telluric' (a low frequency subterranean or subacquatic current) and 'anthropocene' (referring to human activities that have had a significant impact on the Earth's ecosystems). Meades confidently attributes its coinage to the Nobel Prize-winner Paul Crutzen. He's wrong - it was the late Eugene F. Stoermer.

If I settle on this opening entry it's because it is entirely representative of this marvellous yet frustrating book as a whole - a mixture of show-off virtuoso prose, unreliable factoids and occasional moments of real candour and insight.

As a Francophile gourmet Meades will know all about gavage, the French term for  the delivery of food by means of a tube passed through the nose or mouth into the stomach, be it of suffragette or farmyard fowl. In the case of Périgord geese, gavage is performed between two and five times a day for anything between two and five weeks, depending on the size of the bird. A funnel attached to a thin tube is employed to force an enriched grain mash containing fats and vitamin supplements directly into the bird's crop. It's an unattractive practice but the results are sublime - the grotesquely distended and fatty liver of the slaughtered animal is known to the world, and favoured by depraved trenchermen, as foie gras. You can see where I'm going with this . . .

Meades has to date published only two novels - Pompey (1993) and Fowler Family Business (2002) - both overwrought and written in the kind of prose that makes the reader may feel like a French goose. If, like me, you find Meades the novelist hard going over a distance then you are likely to enjoy as much as I did the fragmentary approach to be found in An Encyclopedia of Myself.. Meades works best at short essay length (see the bumper anthology from 1989 Peter Knows What Dick Likes) because his prose can be so dense, so bludgeoningly erudite and prolix, his tone so consistently de haut en bas that one struggles after a few pages - the surface dazzle doesn't have a purchase on the underlying, often very straightforward, thesis.

But that's what we expect from the author - whether in front of the camera exploring the built environment as heir to the great Ian Nairn or, in print, rogering the thesaurus, writing and re-writing the world The author deploys a colossally rich and dense vocabulary, and can use it to drive home propositions which, on dazed reflection, are perfectly unexceptionable but barely audible under the blare and dazzle of his prose. A Meades sentence is lexically steroidal, pumped-up, glistening, fit to burst like an artisanal pork sausage. We can agree to admire the barnstorming erudition, the carnival barker's resistance to empirical fact, the bilious eloquence, the quick intelligence and engagement with the subject. In this he reminds me of Anthony Burgess.

If he sometimes seems clever-clever (which the great Gilbert Adair defined as half-clever, not double clever), Meades is nevertheless essential, for all the crushing hauteur, the connoisseurial sneer and the hectoring public manner. He is an outstanding writer on three subjects - food, buildings and himself.

Meades lives today, enviably, in a real architectural masterpiece: le Corbusier's Cité radieuse in Marseilles, a serene proto-brutalist epic with rooftop creche and pool, running track and superb views of the Mediterranean. Built as workers' housing, the generously-proportioned apartments have now been taken over by affluent middle classes professionals and there's a gourmet restaurant called (with a nod to Peter Greenaway) The Belly of the Architect. It's known locally as La Maison du fada (Provençal for 'The Loony Bin') and construction began in 1947, the year Meades was born.