O love they die in yon rich sky,
They faint on hill or field, or river:
Our echoes roll from soul to soul,
And grow forever and forever.
Blow, bugle, blow, set the wild echoes flying,
And answer, echoes, answer, dying, dying, dying.

What does familiarity breed?  Not contempt, I'd say, but something worse - indifference. Some works of art are so familiar, so irreversibly over-exposed, that they have become almost invisible: the William Tell Overture, the Mona Lisa, Swan Lake, The Mouse Trap and Tennyson's poem (above), which I hope you read before scrolling down here. All of them share a cultural afterglow as something once held in great esteem but no longer regarded as essential. One could only have a reproduction of the Mona Lisa hanging on the wall as an ironic 'gesture' - kitsch, unserious, risible.

There was a time, not so very long ago, when a British education - or 'schooling' - involved learning by heart passages of Kipling and Tennyson and Wordsworth and Keats and Shelley and Byron and so on. This in my own experience included Tennyson's 'The Splendour Falls', which is to modern poetry what Turner's The Fighting Temeraire is to modern art.  They were almost contemporary - Turner's painting dates from 1839 and Tennyson wrote his poem in 1848, soon after a visit to Ireland where he was apparently inspired by a place in the mountains near Killarney called the Eagle's Nest. Do Google image this - it's breathtaking.

Both Turner and Tennyson produced art that is today increasingly inaudible, by which I mean to say neither poem nor painting any longer have an unquestioned centrality to our culture. In the past their ubiquity made it difficult to get a critical purchase on their value and now, because of their presumed redundancy, no serious critic is likely to waste their time on either. Of course, and not to rub it in, both painting and poem are about redundancy.

The old order changeth, yielding place to new,
And God fulfils himself in many ways,
Lest one good custom should corrupt the world.

(Tennyson again, from 'Idylls of the King', and if the lines put you in mind of Withnail's Uncle Monty so much the better.) 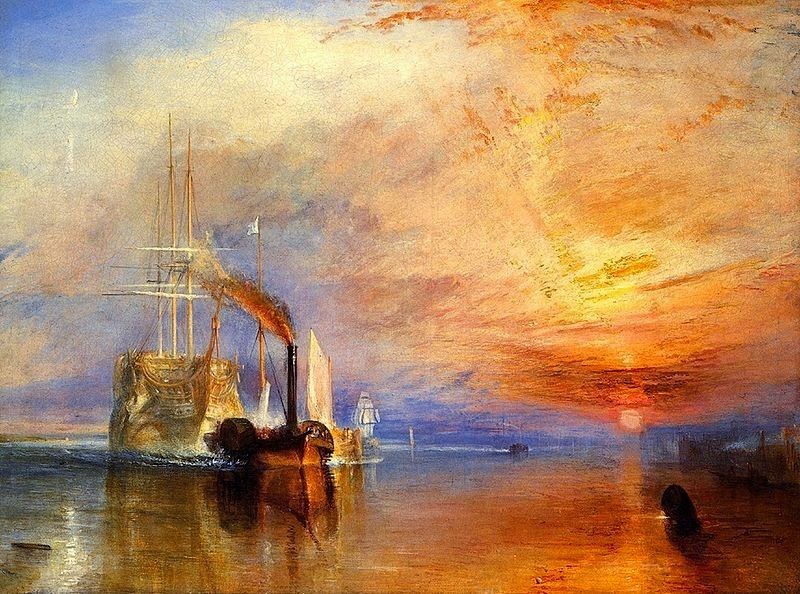 The 98-gun ship 'Temeraire' took part in the Battle of Trafalgar in 1805 and remained in service until 1838. Decommissioned, she was towed from Sheerness to Rotherhithe to be broken up - Turner shows this last voyage as a modern steam tug, bellowing smoke and sparks, fussily tows the venerable sailing ship up the Thames. The sun is setting, not just on the river but on history, and the glory days of Britain's navy. Turner has reorganised the universe to create and accommodate the mood of eulogy  - the 'Temeraire' is shown travelling east, away from the sunset, although Rotherhithe is west of Sheerness. The painting has a dying fall.

The steam tug, while smaller, meaner and more prosaic, is today as antique and anachronistic as the vessels it replaced.  The 'Temeraire' is fading in the twilight haze - bulky and redundant, yet (and here's the paradox) responsible for securing the world in which its successor finds not just a place, but an entitlement. Just as each modern improvement in our electronic gadgetry serves to make its immediate predecessor appear unwieldy, primitive and impractical. Think of early cellphones, the size and weight of a breeze block.

'The Splendour Falls' is likewise about transience, mutability and loss, the kind of melancholy reflections that cluster when visiting the Irish countryside although Tennyson's visit was before the Irish Potato Famine in which around  1 million people died and a million more emigrated. I could do without 'The horns of Elfland' although this certainly contributes to the theme of loss (of the spirit world - fairies and suchlike were an endangered species in the pre-Tolkien industrial age). But what about 'Our echoes roll from soul to soul'? That's a line!


Looking at Tennyson, and at this poem in particular, I suppose there's another sense of  loss: the loss of my own younger self, the schoolboy reading and dimly understanding such verses as an introduction to a grown-up world of loss and pain and regret. It's a poem so familiar that one no longer sees the words (or in Turner's case the brushstrokes). Technique has eclipsed accomplishment. Parhaps that's a definition of great art. You don't hear the engine.