On the buses with Ian Nairn

I've blogged before about the great Ian Nairn and his masterpiece Nairn's London. Here's the cover of the paperback, the best book about London ever written, with the author sitting cheerfully in the cab of a Routemaster bus.


Last weekend, to mark the sixtieth anniversary of the introduction of the much-loved Routemaster bus, more than a hundred of these gorgeous machines gathered in the sunshine at Finsbury Park in North London. It was an impressive spectacle, featuring beautifully restored vehicles alongside others that were clapped out and rusty (but still roadworthy). Some bore garish new liveries and unhappy new guises, one (in shocking pink) promoting the Superdrug chain. There were leaf-green Routemasters (the ones that served the rural outer suburbs), several open top tourist versions, one in sexy 1960s British European Airways guise and several which appear to enjoy a hectic retirement as mobile nightclubs. There was RM1, the venerably futuristic prototype, purring suavely around the park between the plane trees. That Auden line about a tramway running into a wood came to mind . . .

I happened to have a copy of Nairn's London with me (and rarely leave home without it), and was suddenly struck by a familiar number plate - CUV217C. I whipped out my tatty paperback and to my amazement realised that, yes, the bus in front of me was the very same one that featured on the cover of the original, published in 1966.

As fleet number RM2217 (illustrated above) this very bus was to be the last operational Routemaster in public service, on the 159 route between Streatham and Marble Arch. Living as I did at one time in Streatham I must have travelled in it occasionally before the last official run in 2005. A handful still operate as a tourist attraction but not. alas, on Nairn's favourite route 11, from Fulham Broadway to Liverpool Street. Have they really been absent from our streets for nearly a decade?

RM2217 is available as this splendid large-scale model by a company called Sun Star, and I suppose if I were to own a model bus this would be it: 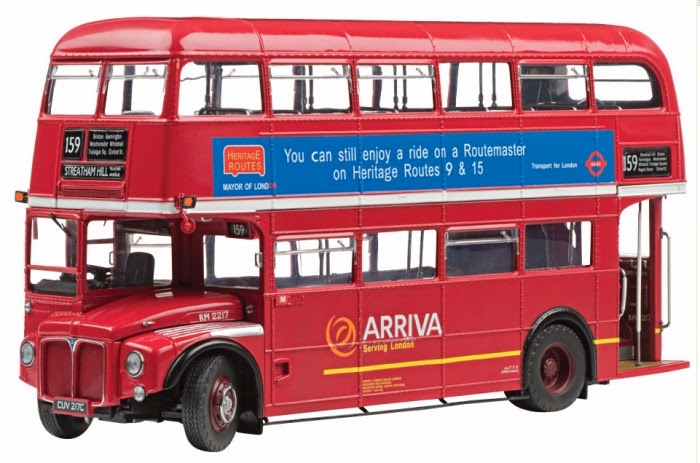 Delivered new to Willesden garage in 1965 (so still quite fresh when photographed with Nairn at the wheel), RM2217 became a 'show bus' for London Transport in 1984, suggesting that this particular vehicle was always kept in good nick for public relations purposes and photo opportunities, which might explain why it was used by the Penguin designer Michael Morris and the photographer Dennis Rolfe. The bus is now available for private hire as part of the Arriva Heritage Fleet - http://www.theheritagefleet.com

So. A suggestion to any Nairnians out there: how about hiring this fifty-year-old bus for a day and taking a Nairn's tour of London, following (say) the route implied on the cover of the book, from Mile End (starting at Spiegelhalters, a Nairn favourite) to Queenhythe via Camberwell and Lululand?

The Arriva website says nothing about the cost of hiring one of these old beauties - but if (say) fifty like-minded Nairn enthusiasts joined up we could probably do the thing for between ten and twenty quid a head, ending up with pints of wallop at his beloved pub, the St. George's Tavern behind Victoria station.

Incidentally it was a pleasure to run into the novelist Simon Okotie at this omnibus gathering. He was selling copies of his excellent novel Whatever Happened to Harold Absolon?, a book set entirely, and ingeniously, on a Routemaster bus. He tells me two sequels are planned. Look out for them . . .
Posted by David J Collard at 17:35