We're having a heatwave, and thoughts turn to drink

I can't stand those urbane lifestyle articles on mixing the Perfect Martini. He who would valiant be needs to know the proper way to make the Imperfect Martini, one that will work in the field, under fire, and in rough and ready environments such as the average suburban kitchen.

It has to be gin for a start, and never ever vodka, unless no gin is available, in which case vodka is fine. But when it's gin it has to be serious gin. Not the oily slick of Gordon's ghastly product, but the bracing naval yo-ho-ho of Plymouth (47% proof). Chilled glasses - chilled everything if possible - but no ice (it dilutes the liquor).  The glass should look something like this, but jam jars (see below) will do in a pinch. 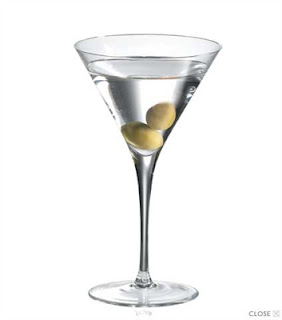 On the vexed question of vermouth I think it's less a question of proportion than whether one should actually use the stuff at all. It's a disgusting concoction when drunk alone (which is interesting, when you come to think about it - the gin (or vodka) is what makes vermouth tolerable, if not palatable.)  Three great men have influenced my own thinking on the matter. Noël Coward suggested that the ideal martini should be made by "filling a glass with gin then waving it in the general direction of Italy"; Winston Churchill was reported to whisper the word 'vermouth' to a freshly poured glass and (best of all) Luis Buñuel held up his gin glass next to a bottle of vermouth, allowing a beam of sunlight to pass through. Comparing this technique to the Immaculate Conception got him into deep water with the Spanish Church.

I tend to use vermouth sparingly if at all, and still have an unfinished bottle I bought for francs in the days before the Euro made the continent so humdrum. I generally use five (5) measures of gin to one (1) of dry vermouth, unless I'm enjoying the spectral companionship of darling Noël, in which case vague gestures toward southern Europe predominate.

I admit that I favour the double olive approach - one green, one black, the latter in memory of Sherwood Anderson (surely the only writer to be killed by a toothpick). But a twist of lemon, while nowhere near as filling, is unarguably more stylish and there's nothing pointed to lodge in your peritoneum.

So - Plymouth gin (chilled), vermouth (if you insist, also chilled) in the measure 5:1. No ice. Olives if you're hungry. There.

W. H. Auden, who mixed his concussive martinis in flower vases and served them at 6pm on the dot in grubby jam jars, insisted that the only place to get a decent martini in England was in the unremarkable Leicestershire market town of Ashby-de-la-Zouch (no doubt his belief was prompted by the proximity of a nearby American aerodrome). There's a whole other blog to be blogged about Auden and booze. Here's a link to a very good piece by Rosie Schaap on the poet's drinking habits. Cheers!
Posted by David J Collard at 07:29