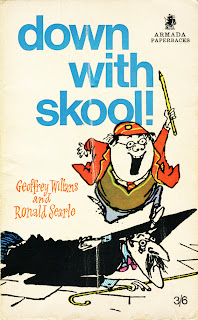 In yesterday's blog I mentioned the series of four books written by Geoffrey Willans, with illustrations by Ronald Searle. It's a pleasure simply to type out the titles - Down with Skool! A Guide to School Life for Tiny Pupils and their Parents (1953), How to be Topp: A Guide to Sukcess for Tiny Pupils, Including All There is to Kno about Space (1954), Whizz for Atomms: A Guide to Survival in the 20th Century for Fellow Pupils, their Doting Maters, Pompous Paters and Any Others who are Interested (1956) and finally, after Willans's early death at 47 (chiz chiz chiz), Back in the Jug Agane (1959).

I shan't bang on about the abiding excellence of these four vivid despatches from the frontline of the ramshackle prep school St. Custards, or attempt to defend them from their witless, poe-faced detractors. Kevin Jackson (a real fan) has written very well indeed about the subject here:

Jackson says that Searle is to Willans what Tenniel is to Lewis Carrol - in both cases the pictures enrich the the books to an extraordinary degree. Searle is especially good at institutional seediness: St. Custards is a sour wilderness of littered corridors, flyblown gothic traceries, inkstained blotch and impoverished, cobwebby, down-at-heel masters.

Pausing only to yell yar boo sucks at J. K. Rowling for appropriating without acknowledgement the name of Hogwarts from How to be Topp, let me share a couple of favourite passages, the first between the books' narrator Nigel Molesworth ('the goriller of 3b and curse of St. Custards') and the loutish schoolmaster GRIMES (always capitalised). The subject is holiday reading matter:

'What hav you read, molesworth?

gulp gulp a rat in a trap.

'Proust, sir. A grate fr. writer. The book in question was swan's way.

'Gorblimey. Wot did you think of it, eh?'

'The style was exquisite, sir, and the characterisation superb. The long evocative passages - '

'SILENCE' thunder GRIMES. There is no such book, impertinent boy. I shall hav to teach you culture the hard way. Report for the kane after prayers.'

There's a whole world in that last sentence, as in Auden's 'like the ham in a temperance hotel'. Elsewhere the following peerless dialogue occurs during a football (or 'foopball') match:

'Wot is yore opinion of colin wilson, the new philosopher?' sa fotherington-tomas, hanging by his weedy heels from the crossbar.

'Advanced, forthright, signifficant,' i repli, kicking off the mud from my footer boots . . .


That 'signifficant' gets a laugh from me every time. I'm afraid that since reading this I've never been able to see Colin Wilson (a very big name in the 1950s, on the strength of his precociously 'forthright' first book, The Outsider) in a serious light - Molesworth's curt summation efficiently demolished any future claim Wilson may have had on my attention. Needless to say when I first read the passages I hadn't a clue who Proust was, or Wilson, but something in me responded wholly to Molesworth's tone - caustic, world-weary and shrewd beyond his years. The books are erudite, subversive, wildly inventive (much of what happens takes place in dreams) and savagely satirical. Molesworth sees things clearly for what they are, and is not impressed. The four books are also impressively consistent - there isn't a dud episode and the inimitable tone never lapses. One can read them in any order (and it's only now I realise that what I've always supposed to be the the last book is, in fact, the second - the order in which one first reads them tends to stick).

One minor detail has puzzled me for years - the odd references by Molesworth to something called radio malt (never capitalised), so I looked it up. This is taken from the ever-reliable Wikipedia:

Radio Malt was an early to mid-20th century brand of malt extract preparation that followed the Minadex trend. Produced by British Drug Houses, it contained Vitamin A, aneurine hydrochloride, riboflavin, and calciferol. The contents were sickly sweet, with a consistency between molasses and treacle.

It was available in the UK by the mid-1920s and assessed as a treatment for rickets. It was apparently often used in English boarding schools as a supplement to a very basic diet, and especially popular after the Second World War to give skinny undernourished children extra bulk. As any fule kno.


Extracts © Picador / The Estates of Ronald Searle and Geoffrey Willans
Posted by David J Collard at 10:44