On 11 May 2012 a fire broke out in Victory Road in Allenton, Derby, England. Five children died in the fire, and one later died in hospital. The parents of the dead children, Mick Philpott (56) and his wife Mairead (31), as well as a third man described as a 'family friend', are currently on trial for their manslaughter. The motive appears to be a desire to get a bigger council house. It's a horrible case, and extensively reported.

Philpott, who has eleven other children, is quite worthless, the kind of man who bursts into dry-eyed sobs whenever he feels cornered (which is often, during the lengthy cross-questioning) and regularly collapses in the dock. He sees himself as put-upon, tragically misunderstood, fundamentally decent and essentially loveable, a bit of a character. He's none of these things, of course. His language is histrionic and entirely unconvincing - he'd stand a better chance of winning the jury's sympathy, if not an acquittal, if he sat down quietly and said nothing. He has pleaded not guilty, although the evidence against him is so overwhelming that his plea is practically a contempt of court. He has an oddly coquettish way of dabbing his eyes with a folded tissue, a daytime telly simulacrum of grief.

Courtroom portraits are aesthetically negligible - a hangover from the days of The Illustrated Police News - but they are instantly recognisable for what they are. For legal reasons they are not made in the court but done from memory outside, presumably using photographs of the protagonists sourced elsewhere. They have a curious function, between the documentary and the didactic. In this case Elizabeth Cook, the official artist covering the Philpott trial, has produced some images that capture something of the man and his behaviour in court. Her vivid backgrounds are interesting. 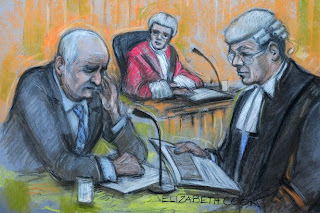 Her images are emphatically democratic, just as likely to feature in the broadsheets as the red top tabloids. Although Philpott has deployed every strategy within his gormless repertoire ("Look into these eyes and tell me that I'm guilty!") the one thing he has so far failed to say is that in the face of his terrible loss he's 'contemplated suicide'. This is odd, because in these dire times, when every celebrity is obliged at some point to undertake their own version of the Stations of the Cross, it is this lowest of ebbs that invariably comes before salvation and re-birth. This is the direction in which Mick Philpott's concocted narrative leads.

It's a phrase that's too easily used, and has become a glib shorthand in public life. Contemplated? Contemplated? Being in extremis, at the deepest pitch of misery, at the very limits of what one can bear; it's not a contemplative state, is it? Contemplation suggests a degree of spiritual resource and self-knowledge that Philpott entirely lacks. Saying that one has 'contemplated' suicide really means 'feel sorry for me'. Of course nobody ever says 'I considered suicide', which strikes a false note somehow, as if suicide is but one of a range of varyingly-attractive options at one's disposal.

If I am harsh I suppose it's because Philpott's manner is so swaggeringly cocksure, so transparently manipulative and his crime so entirely lacking in mitigation, that I want to feel good about feeling bad. The court-room artist captures something of the nature of the accused. It's a missed opportunity that the courts do not commission prison artists to record the punishment.