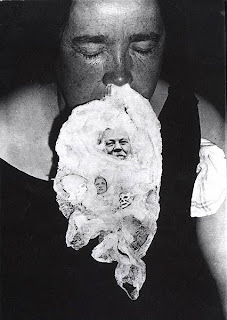 This is a picture of the renowned medium Mary Ann Marshall hard at work - the stuff appearing to come out of her nose is ectoplasm, buried within which is the face of the late Sir Arthur Conan Doyle, along with other less illustrious ectoplasmic personalities. Conan Doyle, a keen spiritualist, had passed over in 1930 and this photograph was taken soon after, when his shade obligingly put in a spectral appearance, although it's clearly a snapshot clipped from Reveille. I'm not sure where the Marshall image comes from - there's no copyright watermark or strap so any copyright claimant please let me know and I'll either stump up the fifteen quid (which I'm told is the market rate) or take down the image (and the whole blog, of course).

The term ectoplasm was first coined in the late 19th century (it's Greek for 'formed outside') and in its various reported textures and consistencies (dry/wet/fibrous/stringy/vaporous etc) reminds me of Lewis Carroll's description of the Snark:

"Come, listen, my men, while I tell you again
The five unmistakable marks
By which you may know, wheresoever you go,
The warranted genuine Snarks.

"Let us take them in order. The first is the taste,
Which is meager and hollow, but crisp:
Like a coat that is rather too tight in the waist,
With a flavour of Will-o-the-wisp."

Ectoplasm, which is an entirely imaginary substance, was usually some variant on butter muslin, or paper and egg white and cloth, which could be tightly bundled into a medium's body cavities and produced in a dimly-lit room (ectoplasm being conveniently light-sensitive) where suitably-primed credulants (if there's such a word, and there really should be, but if not let's call them gullible acolytes) would witness the materialisation of departed spirits, their faces (the spirits', that is) embedded in the spooky muck emerging from the medium (who was almost always a woman, for practical reasons).

Photographs of ectoplasmic evacuations have long fascinated me simply because they are so strange and because, paradoxically, it is their self-evident falseness that makes them somehow convincing - that 'flavour of Will-o-the-wisp'. The material has an alien appearance like a wasps' nest, or meerschaum, and one wonders what it would look like if it really existed. The troubling answer is that it might look exactly the same - meagre and hollow, but crisp. Are there any ecto-practitioners today?

The stuff reminds me also of Flaubert's preference for tinsel over silver, on the grounds that tinsel possessed all the qualities of silver but had one extra - poignancy.
Posted by David J Collard at 07:24