T. S. Eliot sat in a shelter on Margate sands in 1921, connecting nothing with nothing. (Although there's at least a phonic connection between the Kent resort and the London district mentioned in The Waste Land: "My feet are at Moorgate, and my heart / Under my feet".)

He composed much of Part III of The Waste Land in Margate, and you can still sit in that same shelter, now Grade II listed (although reportedly in a run-down state). There's no plaque, thank the stars, but I expect it's only a matter of time before some clot makes an ill-conceived 'intervention'. But before then the council really should think about careful renovation. The recent relaunch of the Dreamland amusement park may (one hopes) lead to collateral restorations.

Another modernist genius stayed in a comparably prosaic seaside resort. James Joyce and Nora spent two months in Torquay in the summer of 1929, staying at the Imperial Hotel.

In his usual deliberate, though seemingly desultory way, Joyce read a series of strange newspapers and magazines. During the afternoons he lay on the beach, as he loved to do, fingering the pebbles for texture and weight. Occasionally he had a rush of energy and during one of these vaulted over a wall, but fell (because his sight was poor) on the other side, hurting his arm. In the evenings he went with [Stuart] Gilbert to local pubs, sipping a little cider (which he did not like) but mainly listening to several conversations at once and, to Gilbert's wonder, following them all.

(Stuart Gilbert (1883 – 1969) was a translator and among the very first Joyce scholars. the two men were friends for many years.)

Which local pubs would the two have visited?

The nearest is The Hole in the Wall at 6, Park Lane, a cosy looking place which has an intriguing plaque:


1815
EMPEROR NAPOLEON - arrives in
TORBAY on board H. M. S. BELLEROPHON  74 GUNS
KNOWN IN THE NAVY AS 'BILLY RUFFIAN'
NAPOLEON WAS STRUCK BY THE BEAUTY OF TORBAY WHICH HE
SAID REMINDED HIM OF PORTO FERRAJO IN ELBA

In 1815 Napoleon had surrendered to Captain Frederick Maitland of the Bellerophon which brought him to England. The Emperor was detained on board in Plymouth Sound during July while his fate was decided. Boatloads of sightseers would the Bellerephon and Boney would obligingly put in an appearance at around 5pm each day. Several artists - the paparazzi of the day - would make lightning sketches as he strolled the deck.

This was a popular subject throughout the 19th century with painters such as Sir William Quiller Orchardson, who depicted the captured Emperor on the poop deck watching the French coastline recede as his retinue, bare-headed as a sign of respect, look on 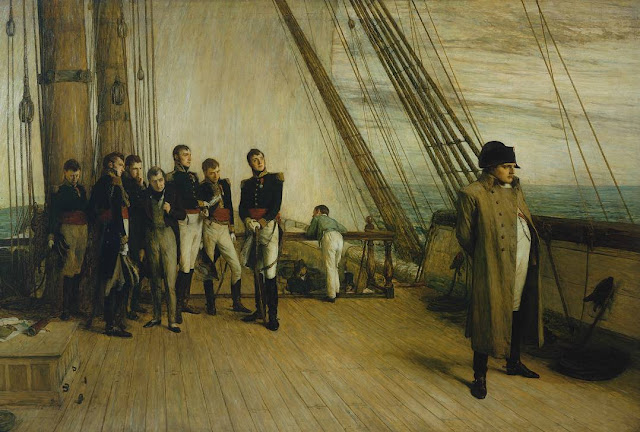 Napoleon on Board the Bellerophon, exhibited in 1880 by Sir William Quiller Orchardson.

Was the Hole in the Wall plaque in place in 1929, and would Joyce have noticed it?

Adjacent to The Hole in the Wall is The Devon Arms. another traditional boozer. I can't find any other pubs within easy walking distance of the Imperial, but perhaps somebody with local knowledge can confirm other possible places, perhaps now long closed. I picture Joyce wincing at the taste of scrumpy. Torquay, despite its prime cation on 'the English Riviera' lacked continental sophistication and a glass of white wine was not the sort of thing one could expect to find in any pub, anywhere. Sherry at best, or perhaps port.

The Joyces also spent a holiday in Llandudno, in North Wales, although the town is keener to exploit a link to Lewis Carroll (the Liddell family had a holiday home there, but there's no evidence to support the view that Charles Lutwidge Dodgson ever visited). Links between Carroll and Joyce are numerous. and I recently came across a persuasive article suggesting that Carroll's (virally unreadable and largely forgotten) Sylvie and Bruno is a key to Finnegans Wake (as well, to be sure, as the rwo Alice books). More on this, perhaps . . .

Passage from Ellman's Joyce biography © The Estate of Richard Ellman;
The Waste Land © The Estate of T. S. Eliot / Faber and Faber Ltd.
Posted by David J Collard at 09:30