Ulysses towers over the rest of Joyce's writings, and in comparison to its noble originality and unique lucidity of thought and style the unfortunate Finnegans Wake is nothing but a formless and dull mass of phony folklore, a cold pudding of a book, a persistent snore in the next room, most aggravating to the insomniac! I am. Moreover, I always detested regional literature full of quaint old-timers and imitated pronunciation. Finnegans Wake's façade disguises a very conventional and drab tenement house, and only the infrequent snatches of heavenly intonations redeem it from utter insipidity. I know I am going to be excommunicated for this pronouncement. 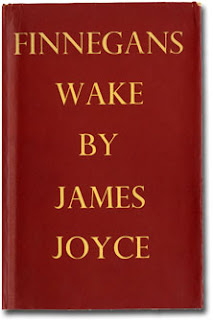 Finnegans Wake continues to divide opinion (perhaps that's what it's for, rather than what it's about). I've been reading it on and off for decades and have never tackled it from cover to cover. I have a shelf load of books about the Wake, of course, from J. S. Atherton's The Books at the Wake (a masterpiece of literary sleuthing), the magnificent Census by Adaline Glasheen, Anthony Burgess's hugely enjoyable Here Comes Everybody (for years AB was JJ's representative on earth, the best kind of explainer and enthusiast) and around a dozen other works of exegesis.
I have three different copies of the book itself all weatherstained and dilapidated, and I even have somewhere an LP of the film score, with no means of playing it. What I don't have is any real purchase on the novel, which is a gaping flaw in my otherwise unlimited admiration for Joyce. I understand exactly what he set out to do in the Wake - I just don't get it.
I'm in good company. Ezra Pound famously wrote: “Nothing so far as I can make out, nothing short of divine vision or a new cure for the clapp, can possibly be worth all the circumambient peripherization.” And here's D H Lawrence on reading an extract of what was then entitled 'Work in Progress' in Transition magazine in 1928: "What a stupid olla podrida of the Bible and so forth. James Joyce is: just stewed-up fragments of quotation in the sauce of a would-be-dirty mind.”
Lawrence also loathed Ulysses, which is dispiriting.
The contemporary novelist Tom McCarthy compares the Wake to a space station circling the plant, always transmitting. That's an appealing image, although I tend to think of it more as a decommissioned nuclear power station, leaking radiation into the earth below and the air above. Finnegans Wake marked was published on May 4th 1939, shortly before the outbreak of the Second World War, which rather put the kibosh on avant-garde literature.
I'll continue to tackle the Wake and - who knows - may finish it some day, only to start all over again.