Perfume and a plug

One spring afternoon thirty-five years ago I was floundering alone along the rue de la Trinité in Paris when I suddenly became aware of an extraordinary fragrance. It set my nerves jangling, my head spinning, my pulse racing. Looking around, I saw a small dark-haired woman in a fur coat walking towards Odéon. I was nineteen, she perhaps in her late forties, and intimidatingly chic. In a moment of uncharacteristic bravado I trotted after her and in stammering schoolboy French (it's got worse since then) asked her what it was that made her smell like that (a pretty accurate translation of my gauche interrogation). She shrugged and said 'Mais . . . c'est Vol de nuit, monsieur,' and walked away. I hope I made her day, because she certainly made mine. I continued my walk along the street in the cool shadow of the grey mass of the great church, rendered light-headed by the gorgeous, lingering, life-enhancing aftermath of her passing.

Later that week in the (now closed) department store Samaritaine I tracked down the perfume. Faced with a sceptical and brightly-enamelled assistant I somehow blagged a sample, dabbing it self-consciously on my left wrist. I walked out of the store, crossed the Pont Neuf and headed eastwards along the Quai de l'Horloge. It was like being in the company of a vapourous spirit guide. I could still catch a wistful trace of the fragrance in my hotel room the following morning. Vol de Nuit has remained my favourite perfume ever since. 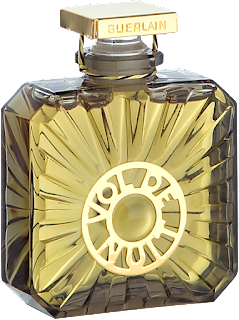 The creation of Jacques Guerlain, it was launched in 1933 and named after Antoine Saint Exupery's novel Night Flight (an account of the early days of aviation from the author of Le petit prince). The chunky bottle represents a rapidly spinning aircraft propeller and is a lovely example of 30s modernism. The top notes (and I had to look this up) are bergamot, galbanum and petit grain; below that jasmine, daffodil and spices; the base combines earthy woodsy notes of iris, vanilla. It's the most alluring and complex aroma, or succession of aromas,  you can possibly imagine. Legend has it that it was originally concocted for, or at least worn by, professional courtesans flying overnight from Paris to North Africa between the wars. It has a fabulous sillage which lasts for hours.


Sillage - pronounced see-yage - is a wonderful word for a wonderful thing: the scented trail left by the wearer of a fragrance. It translates more or less as 'wake' in English - as in the vaporous trace left in the sky by an aeroplane. The wearer makes her mark on the room, on the street, on the air, on the world, by activating the most elaborately complex creation of the parfumier's art using only the heat of her body.

But sillage can also refer to something else entirely - what Walter Benjamin called the 'aura' of artworks.

When it comes to assessing the impact of a work of art on the world at large sillage seems to me just right - a fragrance that fades - because  the reviews and the profiles and the interviews, the media interest and the awards and so on are not intended to last beyond their moment. Yet - to pursue the metaphor - long after the vapour trail has faded the aeroplane is still in service somewhere, resting on the tarmac or making new trails; long after the aroma of Givenchy's Vol de Nuit has dissipated, its far-away wearer picks up the lovely bottle and prepares for another escapade.

Speaking of perfume, it was a close reading of Eimear McBride's great novel A Girl Is a Half-formed Thing that prompted my unlikely interest in the kind of scents that are marketed to teenage girls. The girls on the school bus in her novel favour impulse (the lower case rendering the word less visible, like a barely-noticed aroma), so I looked it up because with a writer like McBride nothing is thoughtless or accidental. Impulse - and you may know this but I didn't - is a body spray manufactured by Fabergé, which is part of  the Anglo-Dutch company Unilever, based in Rotterdam and London. First introduced as a 'perfume deodorant' in South Africa in 1972, Impulse arrived in Britain and Ireland in 1981 and was promoted with the slogan "Men can't help acting on Impulse." Soon after six variant scents were introduced in the United States. They were called Always Alluring, Delightfully Daring, Instantly Innocent, Mysterious Musk, Possibly Playful, and Suddenly Sassy.

Impulse have since then added other products to their range, some of which have disappeared and some of which are still available today. These are worth setting out in full:

There's a rich seam here for both cultural anthropologists and satirists. I asked a friend for her suggestions for Impulse variant brands and she, mother of a stroppy teenage daughter, immediately came up with 'So Unfair'.

But to conclude: much of the foregoing has been little more than a covert plug for my new book, About a Girl, which includes a chapter on the cultural sillage of a great modernist novel. Alert to the least whiff of pretension the author told me she thought the term should be 'silage' which, to be sure, also leaves an aromatic trace.


About a Girl: a Reader's Guide to Eimear McBride's A Girl Is a Half-formed Thing is published by CB editions on 17 March.