These are heady days for Beckettians (or perhaps 'a trifle heady' as the line goes in First Love, a line that Christopher Ricks revealed in Beckett's Dying Words is the stuff of forensic nightmare). Three superbly-edited volumes of correspondence have appeared from Cambridge University Press, with one more yet to come and, rumour has it, a projected 12-volume set to follow. In 2013 the British Library acquired the author's Murphy notebooks which will, one hopes, be published soon, complete with the author's extraordinarily elaborate and suggestive doodles. Then in 2014 Faber brought out (or 'released', as we seem to say these days) a little-known and hitherto unpublished prose work from 1934 entitled Echo's Bones. This is not to be confused with the title poem of a first collection of verses published by the Europa Press in Paris in 1935 as Echo's Bones and other precipitates.

Has any other minimalist led a more prolific afterlife? 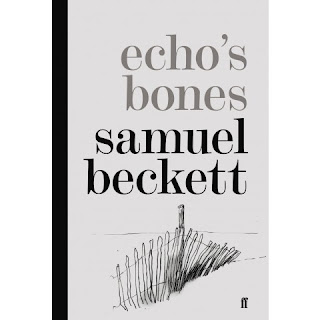 How the prose work Echo's Bones came to be written is of great interest. More Pricks than Kicks, Beckett's 1934 fiction debut, consisted of ten linked short stories set in and around Dublin and was, according to Charles Prentice, his editor at Chatto & Windus, rather on the meagre side. Beckett quickly tossed off Echo's Bones but the result failed to impress Prentice, who wrote to the author to say that the story ‘is a nightmare. Just too terribly persuasive. It gives me the jim-jams’.


It remained unpublished and little-known, even among cognoscenti, a text belonging to what the Beckett scholar Stan Gontarski has called the author's ‘grey canon'. It survived in two identical 28-page typescripts. One, given by the author to his friend A.J. 'Con' Leventhal, is now in the Leventhal collection at the Harry Ransom Center in Austin, Texas; the other was given to the critic Lawrence  E.Harvey and is now at Dartmouth College Library. The typescripts differ only in their marginal manuscript corrections (all of which are scrupulously noted in this very handsome Faber edition).


The dead die hard, trespassers on the beyond, they must take the place as they find it, the shafts and manholes back into the muck, till such time as the lord of the manor incurs through his long acquiescence a duty of care in respect of them. They are free among the dead by all means, then their troubles are over, their natural troubles. But the debt of nature, that scandalous post-obit on one’s own estate, can no more be discharged by the mere fact of kicking the bucket than descent can be made into the same stream twice. This is a true saying.

This is what you might call a Burgess Shale of Beckettian devices - the dead, the muck, the morbidly pedantic refinement ('then their troubles are over, their natural troubles'), the slovenly vernacular (buckets kicked) and the learned nod to Heraclitus followed by a deadpan coda ('That is a true saying'). Surely also 'shafts and manholes' carry a transgressive sexual meaning?

Until now Beckettians have relied on John Pilling's authoritative account of the publishing history of More Pricks than Kicks, which rightly emphasised Beckett's struggle to escape the influence of Joyce and find a voice of his own. I suppose More Pricks qualifies as Beckett's Dubliners, not simply in the setting (with its conscientiously Joycean topographical cataloguing) but in its exploration of cultural and spiritual inertia - the great pervading theme of Joyce's book. While Joyce employed rigorous structuring and the epiphanic device, Beckett's approach was at once more shambolic, anarchic and hyperbolic, the language dense, allusive, maniacally erudite, often obscure and occasionally incomprehensible. He was then prone to work on a 'more is more' principle, in an over-elaborate prose style that Dylan Thomas mocked in a review of Murphy as 'Sodom and Begorrah' - the spare, minimalist writer working with impotence and ignorance has yet to emerge. There is no plot to speak of, and little narrative development. Writing to Prentice in 1931 Beckett said '[o]f course it stinks of Joyce in spite of earnest endeavours to endow it with my own odours. Unfortunately for myself that's the only way I'm interested in writing.'

More Pricks can also be compared to Joyce's Stephen Hero, both books being trial runs for what would come later as fully achieved works. Beckett's answer to Stephen Dedalus is Belacqua Shuah, and the original ten stories in More Pricks followed him from his student days to his accidental death in the final story Draff. In Echo's Bones he is brought back to life, like Holmes post-Reichenbach, a device which may remind us of Murphy's view that the resurrection of Lazarus was ''the one occasion on which the Messiah may have overstepped the mark'.

The plot resembles an Abbey Theatre melodrama: the revived Belacqua, sitting on a fence, is hit on the coccyx (where else?) by a golf ball sliced by Lord Gall, an impotent ('aspermatic') colossus who explains that his nemesis, Baron Extravas ('reversioner of Wormwood and fiend in human guise') has infected his wife Lady Moll with syphilis. To save the estate an heir must be produced forthwith and after some complex wrangling Belaqua steps up to the mark, impregnates Moll and, in due course, a child is born:

Lord Gall was downstairs at the time, counting his golfballs. His medical advisors filed in. It was a dramatic moment. 'May it please your lordship.' said the foreman, 'it is essentially a girl.' So it goes in the world.

Lord Gall of Wormwood also reappears in Beckett's first published novel Murphy (1938) as a customer of the medium Rosie Drew who is (she says), 'in a painful position, spado of long standing in tall male special he seeks testamentary pentimenti from the au-delà'. 'Spado' means impotent (Beckett was in the habit of ransacking the thesaurus), but 'testamentary pentimenti?  A pentimento is the Italian word for repentance but (as I now know) refers also to the alteration of a painting made by an artist during its creation, and one which is evidenced by traces of the earlier work. Of course by the time one has looked this up and mulled over the implications the original passage has curled up died on the page. This is a very Beckettian outcome and all part of the fun, although fun is hardly the word.

It is in the space between the  au-delà ('beyond') and the humdrum en-deçà (translatable as - well what, exactly? ) that Beckett sets up his stall. That his writing should send us all scurrying for the dictionary is evidence of his struggle to escape from the long shadow of Joyce.

The name Belacqua comes from Canto IV of Dante's Purgatotrio. He's a Florentine lute-maker (most likely the nickname of Duccio di Bonavia, a musician with whom Dante seems to have enjoyed an affectionate friendship). Belacqua is famed for his laziness and has given up on ever reaching heaven, He is a Sisyphus with neither slope nor burden who squats in the shadow of a large rock, his arms wrapped around his knees and his head lowered, a characteristic pose for Beckett's characters. Dante's Belacqua represents those indolent spirits who wait until the very last moment before repenting and turning to God, and in Purgatorio the Latin tag Sedendo et quiescendo anima efficitur sapiens ('By sitting and doing nothing the soul becomes wise;) is a byline for intellectual inertia and impotence - Beckett's raw materials.


But the reference to Dante is the mere tip of a fabulously erudite iceberg. The title of Echo's Bones refers to Book III of Ovid’s Metamorphoses, in which are described two transformations of the nymph Echo. In the first, Juno removes Echo’s power of speech - or rather, so arranges things that she is unable either to initiate speech or to remain silent. In the second, unquiet love for Narcissus causes her body to wastes away so that “only her voice and bones were left, till finally her voice alone remained; for her bones, they say, were turned to stone”

Beckett's later characters in prose and theatre inhabit turn and turn about the realms of profound silence and chronic eloquence (or, in extreme cases, helpless loquacity) - think of Winnie in Happy Days, Mouth in Not I and the three adulterous monologuists of Play. Bones and skulls also feature throughout Beckett's subsequent writings and Echo's Bones is, if you like, a skeleton key to the later work. As such it is is an essential addition to Beckett's oeuvre, diligently edited by Mark Nixon, director of the Beckett International Foundation at the University of Reading and building on the work of many earlier scholars. Nixon provides a biographical background and illuminating notes on the innumerable intertextual references.

Since acquiring Beckett's fiction list from the publisher John Calder in 2007 Faber and Faber has done an excellent job in raising the profile of the author's prose works, although the cover designs leave something to be desired. I have to say I prefer the Calder covers. How about this: 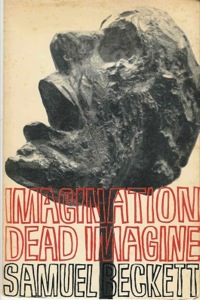